Why Is My Dog Not Eating?

Dog not eating? When your pup snubs the food bowl, it's a sign something is amiss. Here's how to figure out why your dog won't eat and fix the problem

You see that your normally voracious pup seems to be picking at his food bowl and immediately start wondering: Why is my dog not eating? There could be a million causes of a dog not eating, but the most common one is that your pet is sick, says Lori M. Teller, DVM, clinical associate professor at the Texas A&M University’s College of Veterinary Medicine and Biomedical Sciences, in College Station, Texas. Of course, the illness can literally be anything from a mild upset stomach to something grave, like cancer. Plus, there may be behavioral reasons behind your pet’s hunger strike. That means you have to play detective, so you can help your pup regain an appetite—and start gobbling up these vet-approved dog food brands.

Your dog’s got a mild stomachache

Your dog may stop eating because he feels queasy or ate something bad. If you’re wondering “why is my dog not eating,” one way to tell it’s not something more serious is if your pup bounces back to his normal self pretty quickly, says Megan E. McClosky, DVM, lecturer in internal medicine at the University of Pennsylvania School of Veterinary Medicine. Even if you suspect a mere bellyache as the reason for your dog not eating, call the vet anyway. “Dogs have pretty good appetites, so if they are picky eaters, especially when that’s accompanied by chronic signs, like occasional vomiting or occasional diarrhea and soft stools, there’s usually an underlying GI problem that requires more attention,” McClosky explains, adding, “That is more common than people realize.” Your vet can rule out the source of the upset, from food allergies to inflammatory bowel disease.

Your dog has a more serious illness

Infectious diseases, like parvovirus, or conditions such as pancreatitis can be other reasons for your dog not eating, says Teller. Your pup may even have a life-threatening illness like gastric dilatation and volvulus, which causes the stomach to twist up so nothing passes—or even cancer. When your dog is really sick, she’ll probably also be lethargic, throw up a lot, have diarrhea or even bloody stools, or cough and sneeze. The time to worry is when your dog isn’t behaving normally, especially if she refuses treats or people food or if her appetite waxes and wanes, McClosky notes.

Your dog swallowed something

Eating something they shouldn’t have could be another reason your dog won’t eat. Dogs are voracious eaters, so they often scarf things down they shouldn’t—like toys, tennis balls, and even tampons. This is especially true if your dog is young and playful (so you’ll really want to avoid these common backyard dog dangers). One clue: If your pooch vomits or poops out pieces of, say, plastic, says McClosky. If he passes everything out, he’ll probably be OK. But if you’ve got a dog not eating and throwing up, he may have an obstruction in his intestines. Then the vet will have to do an ultrasound to see what got stuck—and probably operate to get it out.

Your dog is in pain

“Dogs do a great job of trying to mask pain but that could be another reason why a dog is not eating,” Teller explains. “Maybe it just hurts to have to get up and walk to the bowl, or to stand or even lean down to eat.” Certain breeds, like Dachshunds and Dobermans, are prone to neck problems, or your pup could have osteoarthritis or even cancer. If you’re wondering “why is my dog not eating,” you have to be alert to other signs to describe to the vet—for instance, your dog is limping, flinching when you pet her, or if your pup is hiding. “If it’s a new behavior that’s not typical for your dog, that may help the veterinarian pinpoint what’s going on,” says Melissa Bain, DVM, professor of clinical animal behavior at the University of California, Davis, School of Veterinary Medicine.

Your dog has a toothache


“Dental problems can cause trouble eating,” McClosky notes. “Dogs with dental problems may drop kibble, chew on one side, or drool excessively.” Older dogs are more affected, especially the smaller breeds, she adds, but any dog can develop a toothache (or even break a tooth). Another big sign that your dog’s teeth are in need of care, says Teller: “Your dog may be interested in food and sniffing it, but it hurts too much to actually take a bite and chew.”


Your dog’s food has gone bad

Dogs aren’t that discriminating, but occasionally, when something has spoiled, your dog won’t eat it, Teller says. It could be a bad bag of kibble or maybe that chicken you boiled for your pup didn’t get cooked thoroughly. How do you know that’s the reason for your dog not eating? “Your dog will eat a treat, but won’t eat the food,” says Teller. So toss it out and serve something else.

Your dog got a shot

Sometimes vaccinations can cause mild lethargy or soreness, causing your pup’s appetite to dip temporarily, Teller notes, adding that this is a pretty rare event. “This may last 24 hours. If your dog isn’t interested in the meal immediately after a vaccination, then just offer the next regular meal after that.”

Your dog is away from home

Some dogs get highly excited or stressed while traveling, and then don’t want to eat. Or they suffer from motion sickness while in the car. “This typically resolves when the travel/car ride is over,” says Teller. If you’re staying over someplace new and your pooch seems uninterested in one meal, wait and try again later, she recommends. Or entice him with something tasty, like a treat inside the bowl.

Your dog is stressed

Severe separation anxiety can put a dent in your pup’s appetite. “If a dog is so panicked when the owner leaves, he often doesn’t eat. When the owner comes home, the dog often greets the owner and then rushes to the bowl to eat. A key thing for owners to consider is if the dog isn’t eating at particular times of the day,” says Bain. Dogs stop eating when they’re boarded in kennels or left in someone else’s care too. The fix: You can feed your furry family member a new food, in a new bowl or toy, or switch from dry to canned (or vice versa), vets recommend.

Your dog is holding out

Does this sound like you? Your dog won’t eat her favorite kibble, so you switch brands. When she stops gobbling that up, you dress it up with something yummier, like cheese or chicken. Pretty soon you’re sitting next to your pooch coaxing her to take a bite, wondering, “why is my dog not eating?” “It feeds into this attention-seeking behavior where the dog says, ‘If I don’t eat, my owner will give me something better,'” Bain explains.

Another variation: You’ve gotten your dog used to people food—hand-fed from the table, says Teller. The solution? After you get the okay from your vet (and provided your dog doesn’t have a medical problem), put down her dish of plain dog food, and take it up after 15 minutes even if she doesn’t eat it, suggests Bain. Try again in the evening, doing the same thing until your dog gets the memo. If table scraps are ruining your dog’s appetite, feed her at a different time and keep her away from the table as you dine, Teller advises. 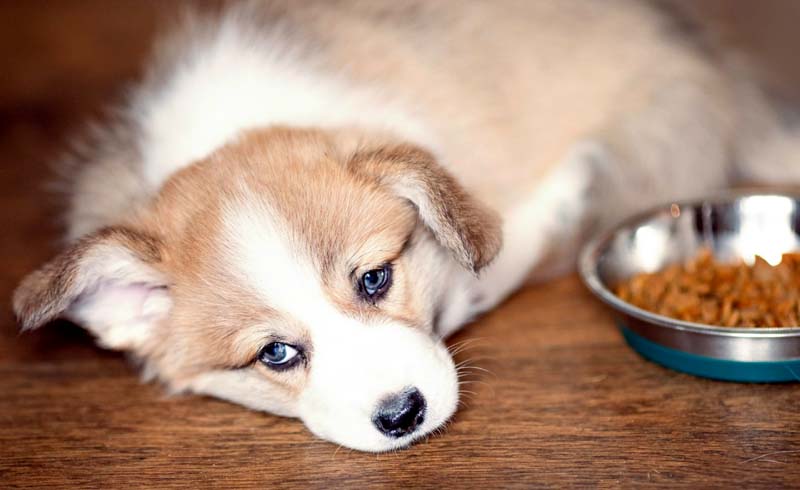 Made with in NYC
Animals,206,Birds,38,Cats,132,Cows,1,Dogs,314,Featured,12,Features,60,Fostering,1,Health,16,Koala,2,Monkey,2,News,3,Panda,3,Penguin,6,Pets,115,Red Panda,1,Squirrel,4,Wildlife,1,
ltr
item
Pets Magazine: Why Is My Dog Not Eating?
Why Is My Dog Not Eating?
Dog not eating? When your pup snubs the food bowl, it's a sign something is amiss. Here's how to figure out why your dog won't eat and fix the problem
https://1.bp.blogspot.com/-Hb3AUGlkFoU/X7ZA1-sqSCI/AAAAAAAADiw/MruKGD5MdfI6yOHViYOQovcaAUd5EqCpgCLcBGAsYHQ/s16000/cake.jpg
https://1.bp.blogspot.com/-Hb3AUGlkFoU/X7ZA1-sqSCI/AAAAAAAADiw/MruKGD5MdfI6yOHViYOQovcaAUd5EqCpgCLcBGAsYHQ/s72-c/cake.jpg
Pets Magazine
https://pets.dearjulius.com/2020/11/why-is-my-dog-not-eating.html
https://pets.dearjulius.com/
https://pets.dearjulius.com/
https://pets.dearjulius.com/2020/11/why-is-my-dog-not-eating.html
true
780598715723239276
UTF-8
Loaded All Posts Not found any posts VIEW ALL Read More Reply Cancel reply Delete By Home PAGES POSTS View All RECOMMENDED FOR YOU LABEL ARCHIVE SEARCH ALL POSTS Not found any post match with your request Back Home Sunday Monday Tuesday Wednesday Thursday Friday Saturday Sun Mon Tue Wed Thu Fri Sat January February March April May June July August September October November December Jan Feb Mar Apr May Jun Jul Aug Sep Oct Nov Dec just now 1 minute ago $$1$$ minutes ago 1 hour ago $$1$$ hours ago Yesterday $$1$$ days ago $$1$$ weeks ago more than 5 weeks ago Followers Follow THIS PREMIUM CONTENT IS LOCKED STEP 1: Share to a social network STEP 2: Click the link on your social network Copy All Code Select All Code All codes were copied to your clipboard Can not copy the codes / texts, please press [CTRL]+[C] (or CMD+C with Mac) to copy